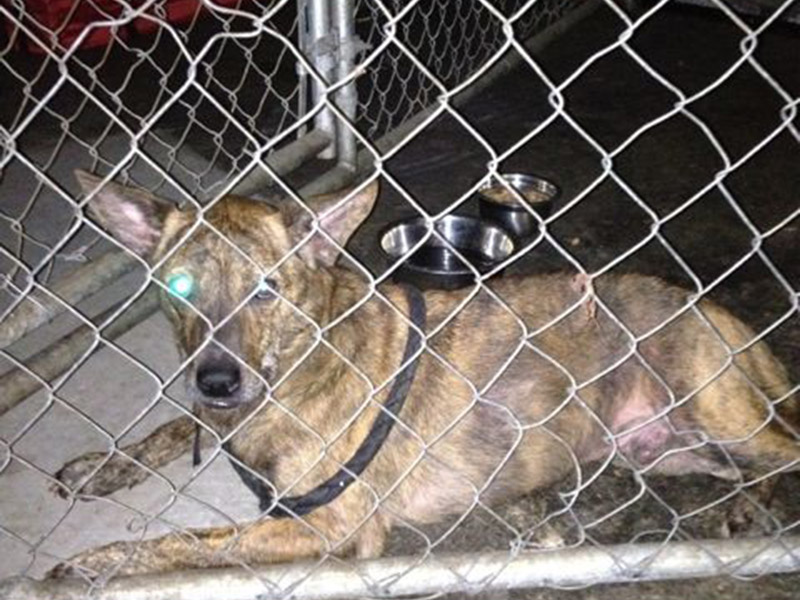 “A dog’s been hit, beside Red Rover on Jackson” a customer reported by phone shortly after leaving with her dogs. I didn’t think twice, grabbed a leash, and shot out the door and around the side of the building.

NOT DEAD BUT NOT FAR FROM IT

I saw the pitiful, brindle dog immediately. He wasn’t dead or mortally wounded at all! Maybe what Stacy said was, “a dog’s going to be hit.” Curse my overactive imagination <sigh>; now that I’d seen the mangy pup, greedily gobbling food from a styrofoam container, I was stuck.

I approached warily. It hasn’t been luck that protected me from bites while training dogs or running cage-free daycares. Dogs have taught me what to look for, and I have been paying attention.

Brindle glanced at my approach from the corner of his eye. He lowered his head into the precious food and got very still (as still as one can be while gobbling anyway). I waited patiently 20 feet away until he licked the clamshell clean and then softly called him.

The dog approached me cautiously. When he got close enough, I reached out and touched his head lightly. He lifted his lip but didn’t back away or show signs of attack. I stood up and moved away from him while smoothly slipping the noose leash around his head.

He growled and turned but took no steps away from me. I finished slipping the noose around his neck and began to walk back to Red Rover. The short walk back to the front was one of desperate trust and measured false confidence on both our parts.

Eventually I opened the front door and called confidently for Kaitlin, the person working with me. She came out and I handed her the leash advising her to stay a safe distance from the dog and make no effort at contact.

Apologizing to an abandoned client–she herself surrendering a much loved poodle puppy she could no longer care for–who nodded as I raced to the back of the warehouse. I called to Kaitlin from the now open back door.

Brindle walked in faith into the “triangle”–a 6’ high chain-link area reserved for dogs who need private space when the warehouse is much cooler. The whole area was currently vacant of dogs because of the heat.

We didn’t even remove the noose before closing the door behind him; it was a thick leash that easily worked loose within a short time. Water and food were slid under the fence and soft bedding dropped over the edge. A strong fan was positioned close by so the hot space would be more bearable.

I couldn’t bring him into contact with the other dogs until his obvious skin condition was diagnosed. At least Brindle was safe.

Stay tuned for more tales in the saga of a “not dead” brindle dog!