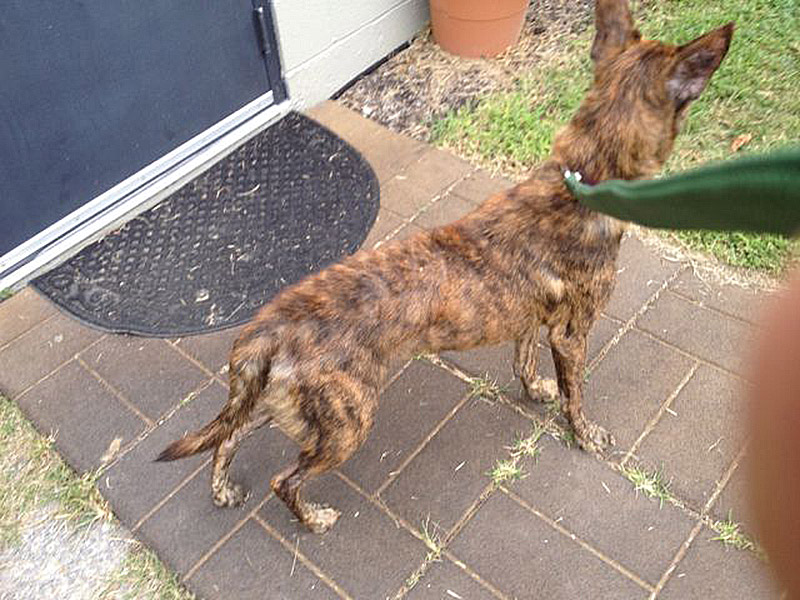 The mangy, emaciated, brindle dog allowed us to enter his triangle to mop. Food is precious to a dog who is no stranger to starvation, so we slipped bowls to him twice a day under the fence while he gobbled, snapped, and growled.

I advised my coworkers not to take any risks. If Brindle was pushed into biting a human, he was sure to be euthanized. We couldn’t prove a current rabies vaccination though it is extremely unlikely in our urban area that he would have come into contact with the virus. I didn’t want to take any chances.

On the following day, Brindle jumped up, eyes dilated to black, and growled at my approach. I angled away slightly but kept coming, keeping my eyes and face gentle and slightly averted. When it became obvious to him that I wasn’t about to steal his space or attack, he jumped down and watched me, full of curiosity.

I nabbed a bag of soft treats and a clicker and engaged in the windfall that is classical conditioning. I clicked and tossed a treat to Brindle, safely inside his triangle, 20 to 30 times. He had nothing to do but listen and eat.

This method makes the click sound have meaning, ie Pavlov’s Dog. It’s typically a one-time exercise that dogs love, obviously! Classical conditioning makes a formerly meaningless click sound mean food is coming. This allows us to use that sound to mark something a dog does so it can be easily named. “The Basics of Clicker Training” article in this blog will provide more info about this method as will my YouTube video on eHow.com: clicker-training-video.

Now Brindle knew I was something special. I was interested in communicating with him and I hadn’t hurt him–so far; better yet I freely gave him something he really needed, food.

It was during that visit that I made an amazing discovery. Brindle already knows how to sit on command. This adult, mangy, emaciated dog once belonged to a person who took the time to teach him to sit. Tears come to my eyes as I relay this information to you. What happened? How did he once belong to someone who cared enough to train him only to be reduced to this starving street dog before me now?

Next time I’ll tell you how we got Brindle to the vet. On the way we discovered he is also neutered. By his sad condition and scared but hopeful faith in humans I’d wager he’s been on his own for about 6 months to a year. The vet estimated his age at 2 years.

I’ve worked with many canines who’ve been let down by humans. Will Brindle be able to trust us again? Will his confidence unleash other ghosts programmed in his mind and heart by former companions?

No matter what, I promised Brindle one thing when he trusted me that day on the street: I would do everything in my power to protect him from cruelty, purposeful and unintended, at the hands of humans. He would never again know lack of food or comfort. Instead I commit to, at the very least, hold him in my arms and let him pass from his canine body in safety and comfort, with the help of a good veterinarian and euthanasia.

But that’s the worst case scenario. Can I help him enjoy this life? 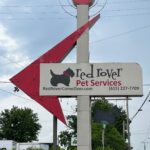