Call or email us today!

Here’s a little history, written by Heidi, the founder: 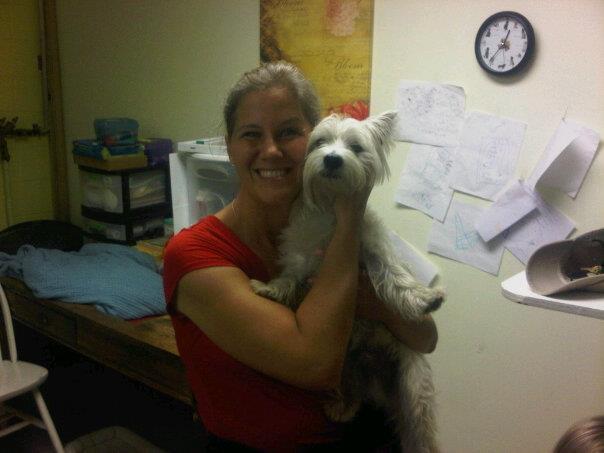 Heidi Dixner, founder of Red Rover Pet Services LLC, is not only a dog-lover and a poodle-rescuer, but she is also a member of APDT, The Association of Professional Dog Trainers

Ah, the age-old story … buy a business & find out you’re pregnant. That was 13 years ago. Curious? Here’s a little “tail.” — Heidi

My personal history in this industry began as a child. By 12, my parents were working hard to talk me out of a career in Veterinary Medicine. They believed it would be a frustrating, useless endeavor for a woman at that time. My mother also thought I should use my scientific bent to become a “real” doctor so I could make lots of money and work with animals as a hobby–hahaha.

The truth is, I didn’t fight it. Looking back, I attended two universities with a School of Veterinary Medicine: Michigan State and the University of Tennessee in Knoxville where I received my Bachelor of Arts. Considering there are fewer than 30 vet schools in the country, that’s quite a feat!

I piddled around through college and after, taking jobs in government and business and becoming very unhappy. When I was 24, I was asked the intriguing question, “If someone supported you and paid all the bills for four years, what would you become?” The catch is you would have to support yourself.

Initially sidetracked in a few fleeting thoughts about computers, I quickly returned to my childhood dream of working with non-human, companion animals. After taking all the night classes I could to supplement my BA with natural science, I discovered I could no longer cling to my day job of 13 years and decided starting a dog daycare would support me financially and emotionally so I could return to school.

I worked with a friend in her kennel and volunteered at Belle Meade Animal Hospital–my overwhelming thanks to Dr. Edwards for his support–while I began working on my next step. Kelly, owner of Pampered Pets in Donelson at the time, sent me to the ABKA, the now-defunct American Boarding and Kennel Association conference in Colorado Springs. We discussed opening a cage-free kennel or even daycare but didn’t get past the planning stages.

Eventually, I opened 4 Paws @ 5 Points with a friend who also felt the pull. Working with a friend is hard and a sure killer of friendship. I determined this wasn’t the right beginning for me; I gave her the business and walked away.

In 2004, Robert and I married and, God bless him, I had an epiphany. It was time to quit my day job and focus on training, my new interest that had replaced veterinary medicine. I quit on January 1st, 2005. Donna, who had worked at 4 Paws, started Red Rover in 2004 to cater to small dogs in East Nashville. She ran Red Rover the way I thought best, with great respect for neighbors, and a relatively small number of dogs in a very clean, pleasant smelling environment.

After a year, she had run into so many obstacles, both personal and professional, she decided to close her doors. Training there at the time, my students introduced me to the possibility of buying Red Rover to keep it open. Everything worked out perfectly and I took over June 1st. She is still a great friend and I appreciate her contribution to this business.

I allowed large dogs right away, in a separate group from small dogs, because I believed people with young, large breeds needed help with exercise and play most of all. I put aside aspirations for training and focused on the business. Oh, and one week after taking over the business, I found out I was pregnant . . .

Red Rover outgrew its space on Calvin Avenue and offered no large spaces for my training classes which I wished to reestablish. I rented space in the Wags and Whiskers location under Hip Zipper after my dear friend Jenny Slagle decided to move out of town. After a couple of months, I realized that being on tap all day in two locations was, for me, a nightmare. Very patient Trisha was nearly driven crazy by the chatty dogs at classes . . . who knew how much noise dogs can make until you’re trying to be quiet.

My search was quickly eliminated in East Nashville since no properties were zoned industrial any longer, the zoning our city designated for kennels. I did want to stay close to our East Nashville roots and customers. I will always consider Red Rover to be an East Nashville native. We grew up there!

October 2008 brought us across the river to our current location. Little by little, my husband and I use our own energy and money, and what Red Rover increasingly generates, to make our spot prettier and better for the dogs and their people. Check out the growing “history” album on Facebook. I am happy to have come to a time when Red Rover can grow our training program and reach out to as many people as possible.

It is important to me that dogs are taught the human language and ways with respect and patience. The relationship that develops when you work cooperatively to motivate in a way the dog enjoys is unbelievable and very productive.

Now we can focus on creating something truly special that Nashvillians can be proud of. A training location where everything–from simple obedience to sports to hunting and other working positions and behaviors–are taught with positive reinforcement, not positive punishment. I believe humans have evolved beyond the need to force and bully other animals. Let’s get started on the next chapter in Red Rover’s history.

In 2008 Red Rover relocated to a larger building and expanded our services to include boarding on-site. We are uncomfortable with the risks of leaving dogs alone overnight. Personally, our dogs are very social and the stress of staying isolated in a strange place is not something we would choose for them.

At Red Rover, most dogs sleep in an area with their dog friends, a few in private spaces. A staff person stays on site through the night. 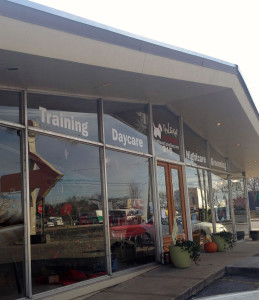 In September 2013 we relocated to a nicer building with more finished space for both day- and night-care at 315 Hermitage Avenue, Nashville TN 37210.

After five years, we’re finally getting our sign up on our vintage red arrow!

*All hours are specific. If you arrive early, you’ll need to wait. If you haven’t arrived or called when daycare closes, we’ll tuck your pup in for the night and see you in the morning; extra charges will be due upon pickup. Phone and doorbell ringers are turned off after hours.

Red Rover Pet Services is conveniently located in downtown Nashville close to the airport, 1.5 miles south of Broadway/Riverfront Park, at 315 Hermitage Avenue (1st Avenue South). We have over 4,000-square feet of indoor space and a large 8′ privacy-fenced yard for your dog to come to stay & play!

Call us today to schedule a tour: