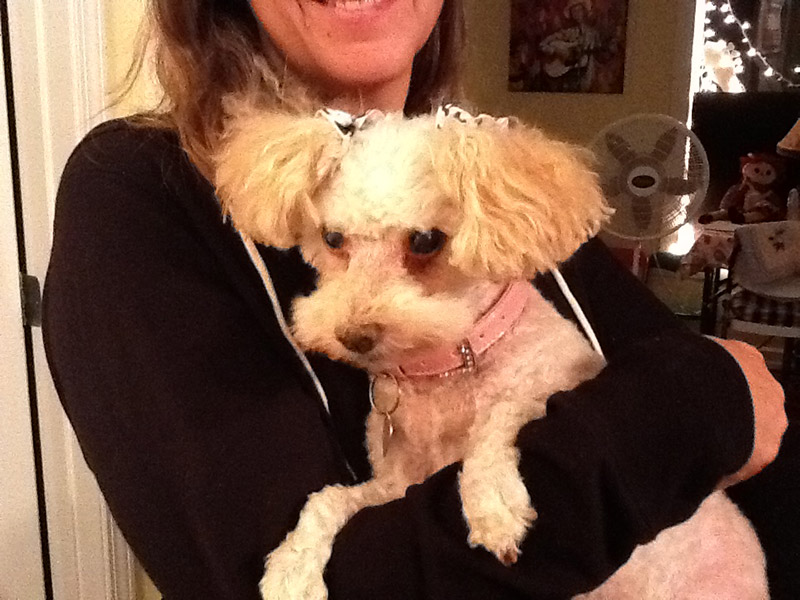 As I sit here and write this Posy is lying next to my chair on a soft bed in the sunshine, she is covered with warm blankets, and breathing softly. Each breath is firmly exhaled and, so far, followed by another. Tears are running down my face and I am gripped by sniffles. I decided long ago to keep Posy as comfortable as possible in this life and I realize now that means I choose hospice care for her instead of a death by needle. I’ve never done this before. Let me start at the beginning.

Thirteen years ago I was still new to rescuing a specific breed of dog; not at all new to rescue. I’d been picking up all kinds of animals my whole life. Oddly enough, at thirteen my parents gave me my first dog. Onyx was a wonderful little poodle and I’ve loved the traits of this breed ever since. After taking over the placement of two 8 year old miniature poodle siblings from a local rescue; I’d become known to the regional poodle rescues and clubs. Place them I did and the poodle calls started coming.

A co-worker brought Posy to my attention. Then called Brandy, the tiny four month old toy poodle was living with relatives; her world filled with pain and fear. My friend witnessed her carried by her head in the arms of unsupervised children and dropped repeatedly. Deeply concerned for her life and safety, she was finally able to talk her owner into letting Brandy go. She pleaded with me, as people often do, to promise to keep the puppy rather than place her. I have always been firm about not getting attached and though I agreed to accept her I would not promise to keep her.

Posy was six months old, just five or six pounds when we took our first walk. Another friend and I gathered our dogs as usual and took off at dusk on a leash-free walk around the local golf course. Posy gamboled along with three other dogs and seemed happy to be free. I made the mistake of taking my eyes off her for a few minutes and when I looked up again, she was gone. We searched for Posy until nearly midnight. Crying and fretting about some imagined, terrible fate I promised a higher power I would take care of her forever if I could just find her alive. We quit and went home where I paced until first light. At 5 AM I jumped on my bike and rode to the other end of the course, constantly calling and raking the course with my eyes. I was stunned when I finally saw a small, white shape wandering aimlessly miles from where she was lost. She didn’t acknowledge my presence until the wind shifted, carrying my scent to her. She turned to face me, standing still; I was feet away when she threw herself into my outstretched arms.

A doctor eventually determined that Po had suffered brain damage in that early life before coming to me, making her perception of objects challenging to her. She frequently froze at color changes on the floor as if standing at a precipice. At times she threw her body off steps and furniture, apparently frustrated by her inability to navigate them. No matter what happened before; she loved children and other people. 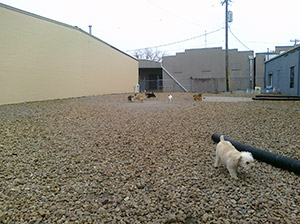 As a young dog, before her ways caused damage to her back and the resulting pain, she loved to snuggle and wagged her bottom joyfully when children stopped to give her attention. Her propensity to bark uncontrollably for long periods at noises over a mile away helped me decide not to place her. For my promise that night on the golf course to be kept, I couldn’t risk placing her in an inexperienced home. Her difficult behaviors and her willingness to bite, quite hard… you can ask her first groomer and Ting and Sharon, would surely put her at high risk of early euthanasia.

We’ve seen 13 years together now, me and tiny Po. She’s led a very sheltered life in quiet places and on flat, even colored surfaces. Lately as her hearing and eyesight have failed, she has accompanied me more frequently to my dog daycare; no longer barking as much and becoming ever sweeter and goofier. Just two weeks ago Sunday, Posy entered the Nashville Lifestyles Cover Dog contest, ostensibly competing viciously against her standard poodle, brother Jo. She trotted through the beautiful grounds at Cheekwood, happily greeting all manner of humans and canines. She still wears the bow in her hair and the soft, clean, untangled coat of a recent grooming. 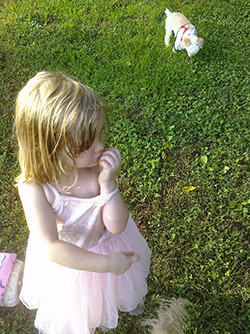 Although she had her moments with some, sorry again Ting and Sharon, Po had some moments of grace in her later life. She never snapped at or bit my daughter Svea but treated her with love and affection, eventually even surpassing her patience with me for this child. She was adorable and quirky the last few visits to Red Rover. Robert just commented with surprise on her passing, “she was so alert and happy lately!”

Last night when I put her to bed she seemed a little restless, happy to see me, and otherwise the normal Po. No sounds through the night, her safe room is below our bedroom and adjacent to Lady and Jo’s room. This morning I opened the door to find her sprawled out on the cool floor. I carefully picked her up, knowing her painful back and concerned that she would bite or I would hurt her. She didn’t struggle when I picked her up and she was shivering. I wrapped her in my coat and sat next to her on a warm bed in the sun.

Posy lifted her head several times to look around but refused water. Eventually her shivers stopped as her blanketed body warmed in the sun. I tried again to give her warm, watery broth but she just laid her head down and relaxed so I left her alone. When she didn’t get up in spite of her body temperature returning to normal I began to think her time had come to transition from this earth. I believe in the permanence of life, even after “death” here.

I am aware of Posy’s increasing health challenges as she aged. I have cared for many animals in all stages of health over many, many years. For the first time my decision was to stay quietly and calmly beside her and make her as comfortable as possible. She was not in obvious pain. I searched briefly and found this wonderful site about hospice care for pets:http://www.spiritsintransition.org/faq.html. My heart loudly told me not to disturb Posy with a trip to the vet, shots and trauma. I waited.

When it got a little cooler outside I brought her bed in, carrying her carefully. She was now less responsive and shivering again. I laid a hot water bottle against her back inside of her blankets, sweaters from the laundry bin that smelled strongly of me. I returned to continue this story when she began to gasp. She wasn’t moving much and her eyes had lost focus so I stroked her back and told her over and over how much I love her and how grateful I am for her. Svea, just six years old, came up and began saying the same, both of us crying freely. Posy’s body stilled.

Svea looked at me and said, “Mommy, you look funny with your nose is all snotty.” We both started laughing and I believe at that moment we began to heal as Posy made her way into a more pleasant experience. She passed from the earth so gracefully… in like a lion, out like a lamb.